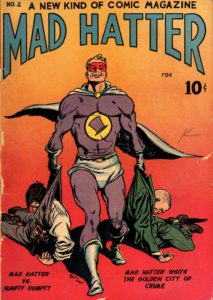 By day, he was Grant Richmond, a junior partner at a law firm but, by night, he was the Mad Hatter, striking fear into the hearts of criminals. He had some colorful villains in his two appearances including the Gargoyle and Humpty Dumpty.

Well, it has been 70 years, but, at last, the Mad Hatter fights again!!! You can find him alongside the Blue Flame and other heroes in The Liberty Brigade — coming to Kickstarter on August 1

Our second profile of Mr. Freedom.

The third member of The Liberty Brigade is probably the best known public domain character on the team, Cat-Man.

The fourth member of The Liberty Brigade is The Green Turtle. His first appearance was in Blazing Comics #1 in 1944.
Latest News
Nostalgia Comics(TM), The Blue Flame(TM) and all characters featured herein, their distinctive names, images, elements, logos, symbols and likenesses are (TM) and © of Thrilling Nostalgia LLC.
Back To Top
×