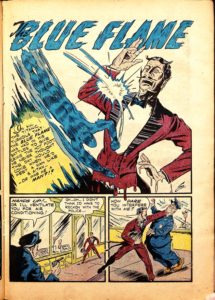 The Liberty Brigade was formed by President Franklin Delano Roosevelt to help protect the homefront during WW II. The team has been involved in major missions throughout the War and members have come and gone, some voluntarily and some for other reasons.

First up is The Blue Flame whose first and only appearance was in a six-page story in Captain Flight Comics #11 published by Four Star Publications in 1946. The Blue Flame had no name, no origin and no explanation of who he was and or how he obtained his powers. In fact, the villain he fought, S. Aitan, got away in the story.

So, if you want to know the Blue Flame’s name and how he obtained his powers, we will answer all of these questions when The Liberty Brigade: Last Gasp for the Axis comes out on Kickstarter, starting August 1. Feel free to sign up for our mailing list at www.thrillingnostalgia.com.

Where Cat-Man goes, Kitten cannot be far behind. She is a member of The Liberty Brigade as well as Cat-Man's partner.

Though he is not a member of The Liberty Brigade, The Spark Man will be making an appearance.
Latest News
Nostalgia Comics(TM), The Blue Flame(TM) and all characters featured herein, their distinctive names, images, elements, logos, symbols and likenesses are (TM) and © of Thrilling Nostalgia LLC.
Back To Top
×