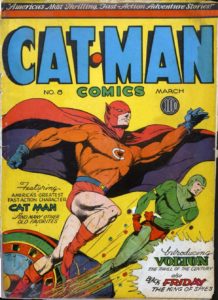 The third member of The Liberty Brigade is probably the best known public domain character on the team, Cat-Man. He debuted in Crash Comics Adventures #4 (1940).

Sadly, he will be MIA for much of the comic book – why? Sign up for our mailing list  and buy the book on Kickstarter on August 1st.

For those who don’t know, David Merrywether grew up in Burma and was raised by a tigress after his parent’s death. After living with tigers for years, he gained extraordinary abilities, such as super-strength, agility, night vision and, of course, the 9 lives of cats. Returning the to USA, he determined to fight crime and anyone who would harm the innocent. Thus, he was reborn as the Cat-Man.

Where Cat-Man goes, Kitten cannot be far behind. She is a member of The Liberty Brigade as well as Cat-Man's partner.

Though he is not a member of The Liberty Brigade, The Spark Man will be making an appearance.
Latest News
Nostalgia Comics(TM), The Blue Flame(TM) and all characters featured herein, their distinctive names, images, elements, logos, symbols and likenesses are (TM) and © of Thrilling Nostalgia LLC.
Back To Top
×