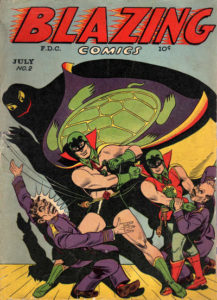 The fourth member of The Liberty Brigade is The Green Turtle.

His first appearance was in Blazing Comics #1 in 1944. He was created by Chu F. Hing, a Hawaiian-born Asian American and was the first Asian super-hero in American Comics to have his own comic book. The Green Turtle fought to defend China from Japanese invaders in WW II in his five comic appearances in the 1940s.

The third member of The Liberty Brigade is probably the best known public domain character on the team, Cat-Man.

I'm a malevolent Lama, up to no good and very powerful. Who am I?

First up is The Blue Flame whose first and only appearance was in a six-page story in Captain Flight Comics #11 published by Four Star Publications in 1946.
Latest News
Nostalgia Comics(TM), The Blue Flame(TM) and all characters featured herein, their distinctive names, images, elements, logos, symbols and likenesses are (TM) and © of Thrilling Nostalgia LLC.
Back To Top
×